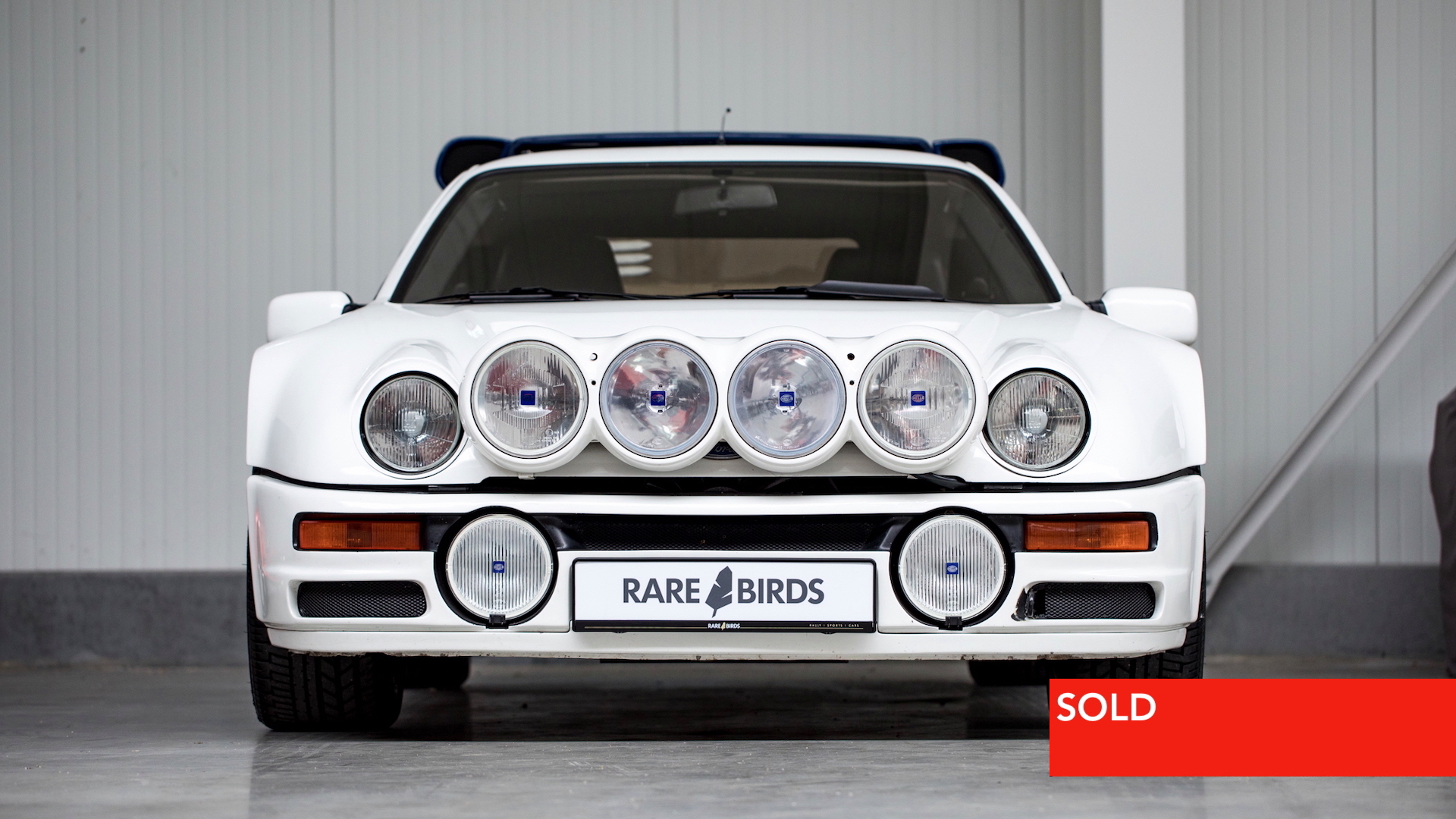 In 1982, the International Automobile Association (FIA) introduced group B in the world rally championship. With this, the wildest of all rally times began, which came to an abrupt end in 1986. The breakneck group B was more popular than Formula 1 during its peak stage.
The powerful winged monsters pushed the known boundaries of motorsport until then and thrilled with dramatic rides that resembled a ride on the bullet.

When the new regulations were introduced, Lancia and Audi could send suitable basic vehicles into the race. Ford racing team could not do this since it had to be upgraded as soon as possible. The attempt to arrange a rally vehicle on the Fiesta platform was not successful. The project was stopped after a short time. Now the talented John Wheeler, who switched from Porsche to Ford, was there to help the project achieve its breakthrough. He started working immediately.

Wheeler developed RS 1700 T: a rear-wheel drive vehicle with turbo engine, which could keep up with Ascona 400, Fiat Abarth 131 and Lancia 037. The way to the tough rally showdown seemed clear. Unfortunately, this was now followed by a stumbling block that caused the downfall of the project: the former Ford bureaucracy.

Slowed down due to bureaucracy

When the location for production of 200 basic vehicles necessary for the homologation was finally determined after long decision-making processes, too much valuable time was passed. Group B had initiated a proper arms race that did not allow any delays. Ford realised that RS 1700 T had already been technically dependent on the competitors. Thus, Ford had to stop the RS-1700 project immediately.

The car bodies were predominantly scrapped; however, the 200 high-performance engines had to be reinstalled soon. Despite the unsuccessful attempts, a group B-compliant vehicle was still needed. This time, Ford did not want to make any mistake.

The breakthrough began with a bold step. Ford decided to become the only manufacturer to develop a rally car that is not based on a series model. On the basis of the minimum quantity for homologation, it simply named this as RS200. The simple name referred to a powerhouse, which could optimally master the requirements of the group B regulations.
RS200 was redeveloped from scratch without restrictions. Ford produced for example, the chassis designed by Ghia made of aluminium honeycomb monocoque with GRP and Kevlar elements. The technically complex placement of engine, gearbox, differential and transfer case ensured the best handling in competitive environment. RS200 had double wishbone suspension, double shock absorber and magnesium alloy support. The result was a powerful vehicle that was well prepared for the rally battle.

During the development of RS200, Ford implemented the decisions quickly. Unfortunately, there was yet another struggle. The procurement of individual components was extremely difficult. Thus, RS200 made its first international appearance in 1986.

Finally: a group B car with winning potential

The long wait was worthwhile. Though RS200 was somewhat heavier than Lancia S4 or Peugeot T16, it was immediately competitive. This is all the more surprising when you consider that Ford did not start with the so-called evolution models contrary to its competitors, but started with cars based on the 200 homologation vehicles. This clearly showed the winning potential of the powerful RS200.

Unfortunately, the racing car could never develop performance capability in world rally championship. This time the fate of racing thwarted its plans.

The turning point: for group B racing series

The “HP monsters” of group B with power up to 550 HP raced to Formula 1 level in 1986. With an incredible acceleration (Audi E2: 0-100 km/h in 2.6 seconds), these had become difficult to control. The inevitable happened. After a large number of fatal accidents, the association took emergency action and discontinued the group B racing series. Only the memories of a fast-paced rally time have remained in which the thrill of speed prevailed over safety issues in the short run.

From a dream to impressive street-RS200
Now, Mr. Murray dreamed of a new car. The visionary wanted to build the best ever street-RS200. For this purpose, he ordered modified RS-200 vehicles from Ford and rebuilt these with dedication. The Ford RS200 S (number 102) offered by us is one of these 20 specimens.
Mr. Murray missed the street version, the blue rally stripes and the distinctive “ears” (additional air inlets on the roof). In addition, he equipped the vehicles with comfortable seats and power windows. He achieved the most important difference through the improved performance from 250 to 350 HP.
The Ford RS200 S with the number 102 is documented in the book by Philippe Olczyk (“Ford RS200 to Focus WRC”) and Justin Smith (“Ford RS200: The Story So Far”).

Our RS200: the epitome of a fast-paced era of rallies

The street version of the rally star was technically revised recently by a Ford RS-200 specialist and is in top condition. The car was registered in Germany by the last owner. The future owner will receive a rare piece that personifies the spirit of an impetuous era of rallies. 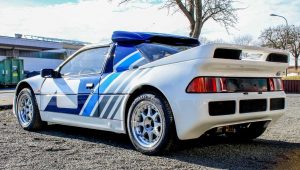 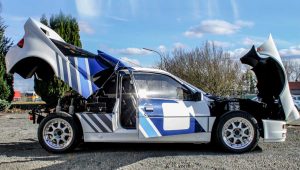 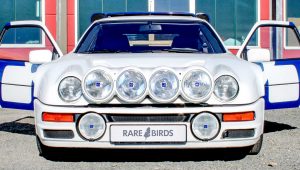 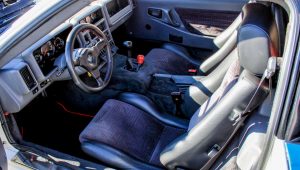 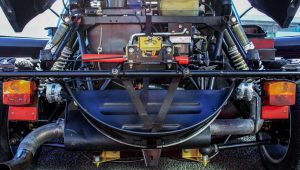 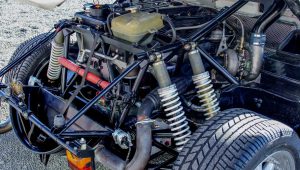 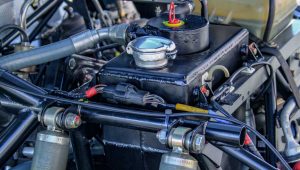 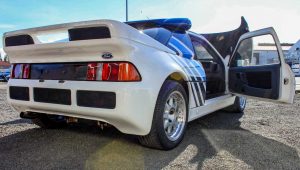 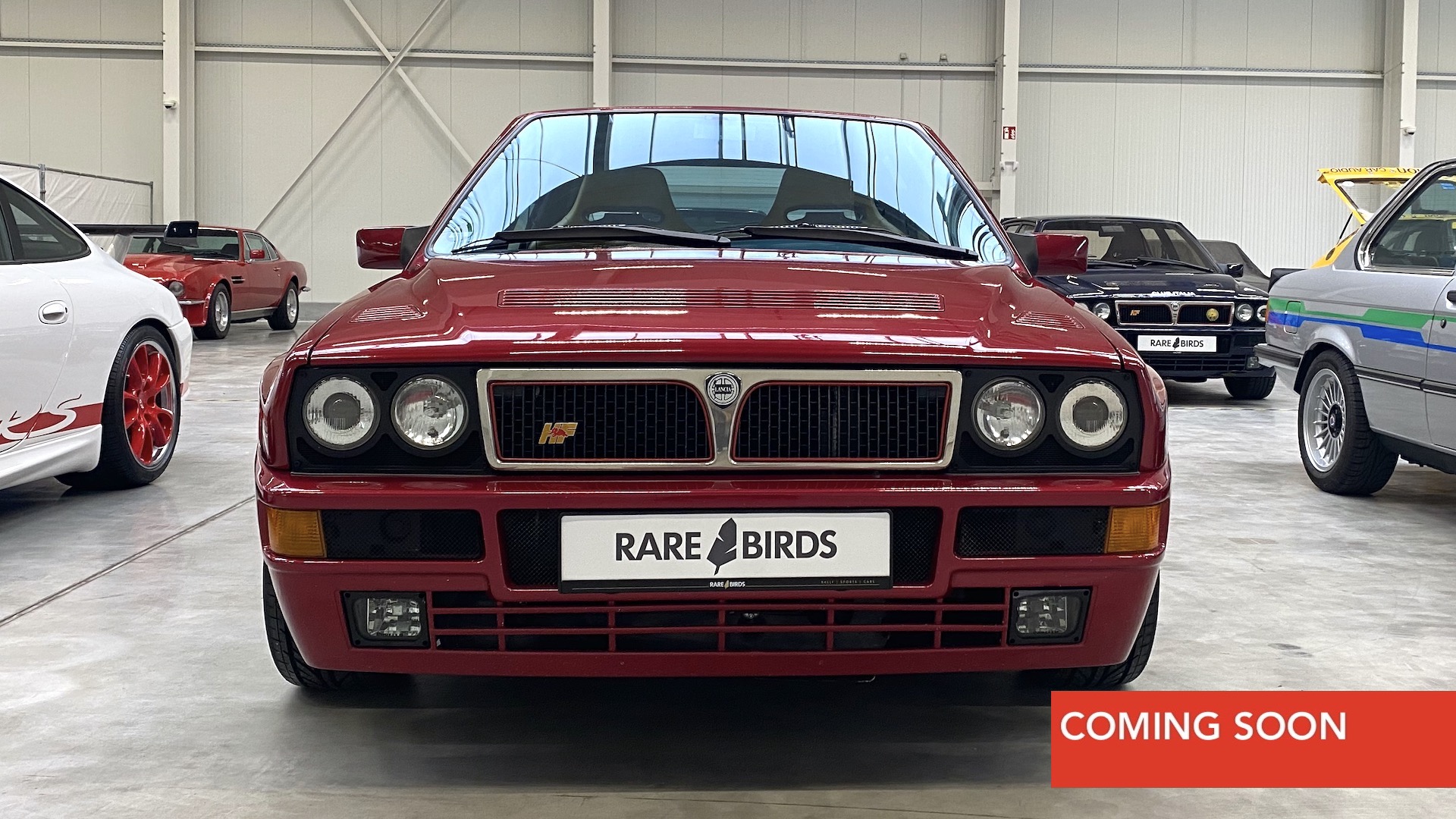 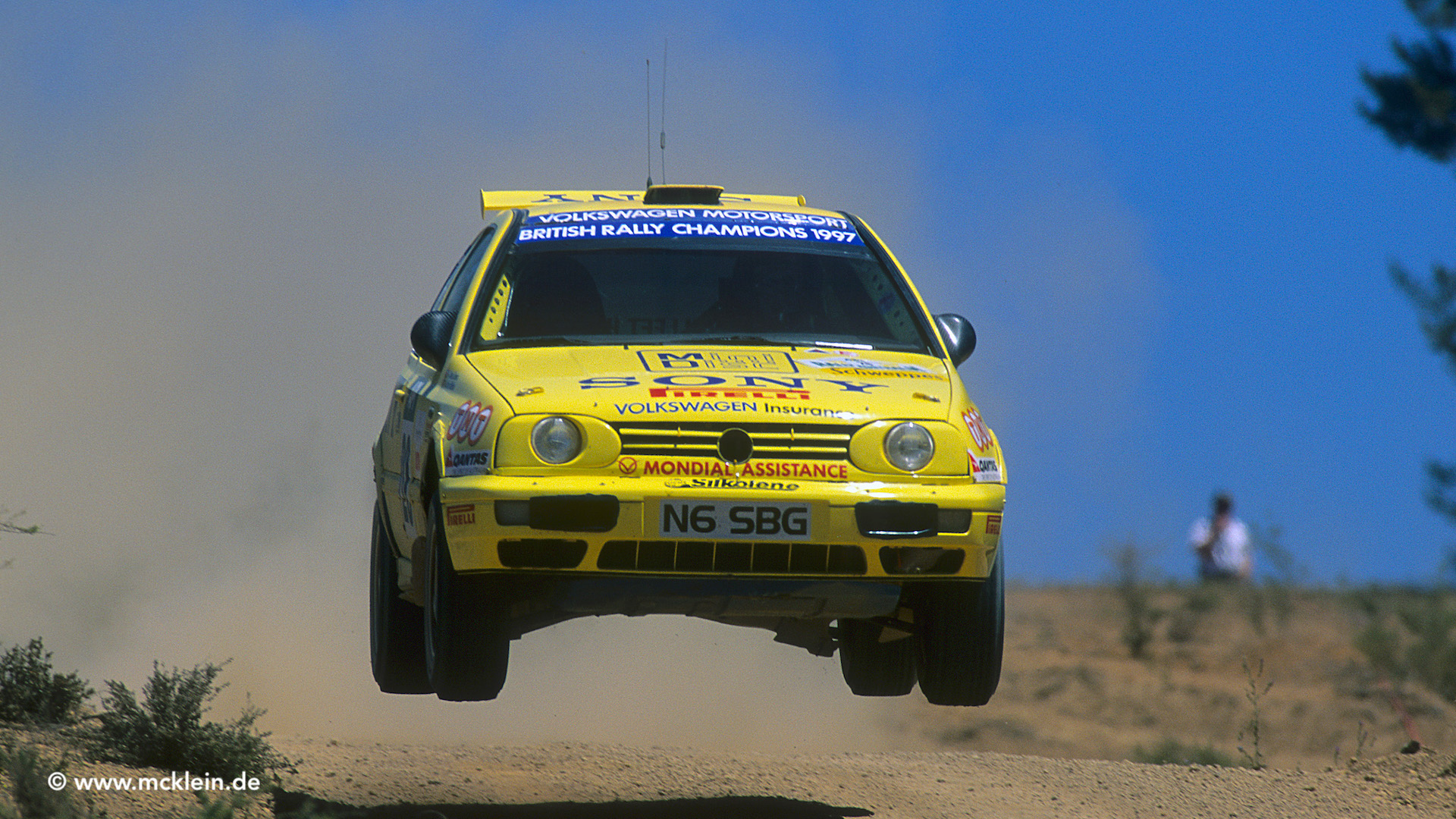 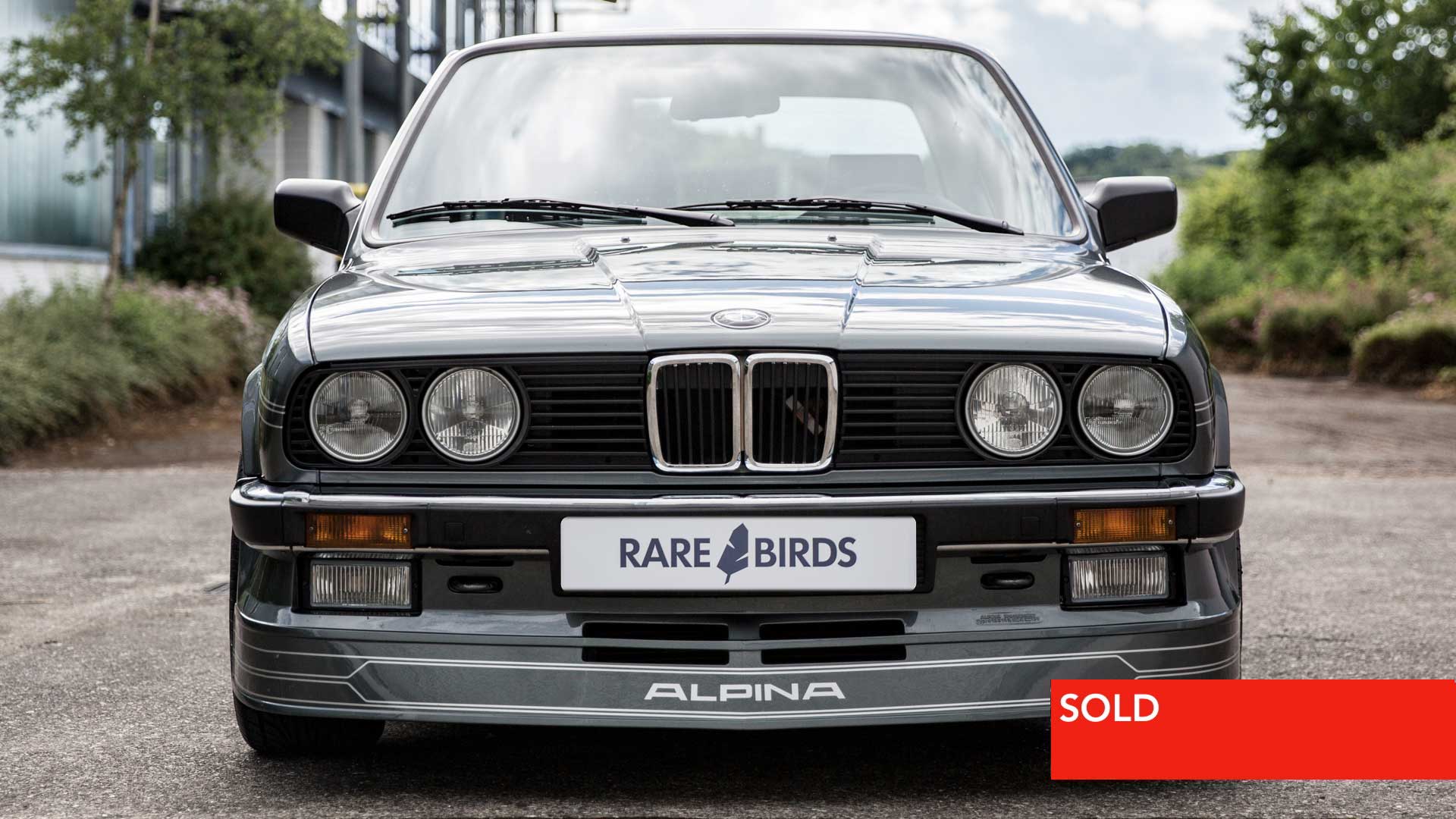